While PAPILLONS and MINAGRIS started recently; however, with the expertise available in both project consortia and based on a first screening of knowledge gaps in relation to agricultural plastic pollution of agricultural soils, we are already able to outline preliminary policy recommendations – both knowledge gaps and policy recommendations will be refined and backed up based on a concerted and aligned scientific effort in both projects – will yield a concrete set of actionable policy recommendations by 2025 in support of the EU zero pollution strategy and new EFSA regulations for pre market procedures and the use of agroplastics.

The final version of the documents include minor clarifications to specific points posed during the interaction with the stakeholders. For the sake of transparency a version with tracked changes is also available. 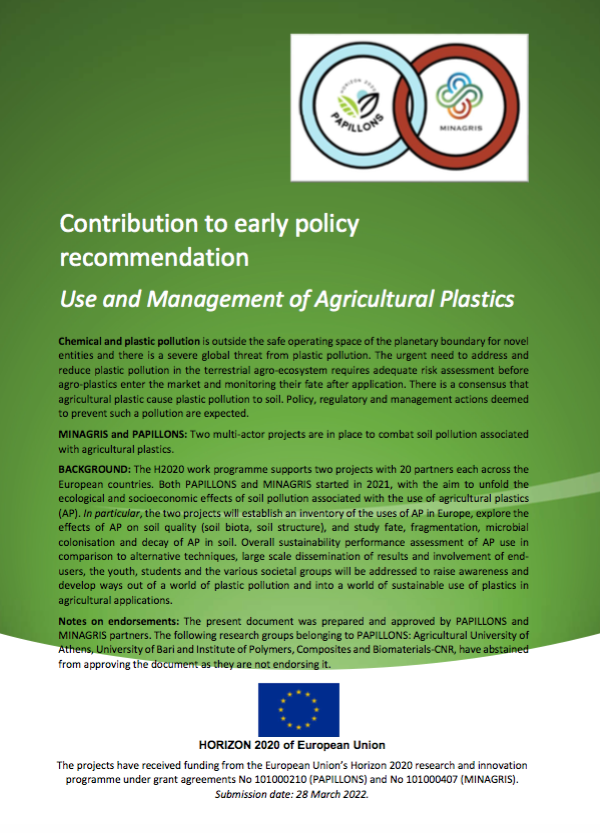 1) Insufficient systematic knowledge on the amounts of (micro and nano) plastics that are unintentionally introduced into agricultural soils through agricultural practices or from other polluting sources.

2) No study has empirically analysed the long term effects of the accumulation of debris from the fragmentation of conventional polymer-based AP on soil health, soil biodiversity and related soil ecosystem services under different soil conditions (e.g. temperature, moisture)

3) Lack of knowledge on long-term effects resulting from the use of biodegradable polymer alternatives in AP applications (e.g. biodegradable mulching films).

4) Lack of available data on the composition and long-term effects of chemical plastic additives used in AP products.

5) Insufficient understanding of the lifecycle of AP products with regard to fragmentation into micro- and nanoplastics.

6) Uptake of micro and nanoplastics by crops and their accumulation in the terrestrial food chain has been proven in recent studies. Still, the risk for human health by such uptake processes has not been studied and remains unknown.

7) Limited knowledge about the interaction of APs with other organic pollutants intentionally (pesticides) or unintentionally (veterinary drugs) released in agricultural soils.

8) No comprehensive understanding of the role of the plastisphere as a carrier for the dispersal of plant and human pathogens, and antibiotic resistance genes (ARGs).

PR1: Long-term environmental and agricultural sustainability should be the primary goal of new policies addressing AP use and management in Europe.

PR2: Policies should promote a better and more traceable end-of-life management for APs, harmonized across Europe.

PR3: Policy on AP use should be harmonised with other existing policies or regulatory frameworks.

PR4: New policy should encourage the development and maintenance of databases that collect information about AP use and end-of-life handling and should utilise models for effective AP management practices.